"What a Friend We Have in Jesus" by Joseph M. Scriven Hymn Story by Diana Leagh Matthews 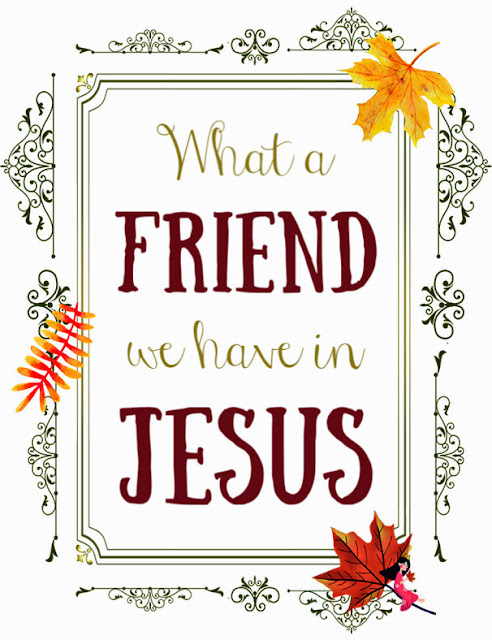 Imagine your life held so much sadness and tragedy, that you willingly decided to take and live a vow of poverty. In our day and age, this seems extreme, but it is the story of the author to the hymn, “What a Friend We Have in Jesus.”

The lyrics were penned by Joseph M. Scriven in the mid-1800s. Mr. Scriven longed to bring comfort to the mother who gave him life in 1819s Banbridge, Ireland.

He had not seen his mother in over a decade when word reached him at his Canadian home that she was ill. Sitting at his desk, he must have thought back over the events that separated him from his mother.

He was born the second son to John, a Captain in the Royal Marines in Canada during the War of 1812, and Jane Medlicott Scriven. In his youth he attended Trinity College in Dublin, Ireland.

As a young man, he was deeply in love and looking forward to his wedding the next day. Imagine the heartbreak, as he waits on the opposite side of the bridge for his bride to meet him. While traveling across the River Bann, she fell off her horse and died in a tragic drowning accident. Instead of walking down the aisle to meet his bride, he was now forced to say goodbye to the woman who had stolen his heart.

His grief was so great he left Ireland in 1845 on the ship Perseverance, saying goodbye to his beloved Mom and friends, to start a new life in Canada. He did return to Ireland after a couple of months to recover from a short illness. 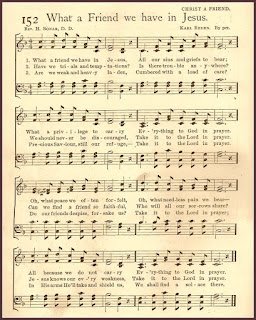 The following year he traveled as a tutor with a family to the Middle East where he had what he called a “Saul of Tarsus” moment on the street called “Straight in Damascus.”

Canada offered him a fresh start, where he taught school for a while. Joseph stayed with a local family and paid for his board by doing various chores, such as cutting wood.

During this time he was teaching at Woodstock and Brantford in Canada, Joseph met Eliza Catherine Roche, who was a relative to one of his students.

The two fell in love and once again Joseph was engaged to be married. Before their wedding could take place, a full immersion baptismal service was held in Rice Lake.

Eliza, who was already battling consumption, developed pneumonia and died four months later on August 6, 1860. She was buried in the little cemetery beside the Pengelley chapel.

Joseph Scriven was again left heartbroken but leaned on his faith in God. After losing his fiancé, he spent considerable time in prayer and Bible study.

Through his studies of the Sermon on the Mount, the twenty-five-year-old teacher made a vow of poverty. He sold all his earthly possessions and vowed to give his life to the physically handicapped and financially destitute.

This is a vow that he reportedly never broke. He spent the remainder of his life giving his time, money and clothes to help the less fortunate and spread the love and compassion of Jesus everywhere he went. He preached wherever he found people gathered.

The Port of Hope journal says that he preached “in the country or on the street corners of Port Hope, Millbrook or Bewdley, sometimes to their express annoyance. Pelting with fruits and vegetables did not stop him. Arrest didn’t deter him.

Scriven became a familiar sight around Port Hope, a big man with bushy white hair and full white beard, carrying a buck and a bucksaw, offering to cut wood for anyone who was unable to cut his own or pay someone to do it for him. But he wouldn’t cut wood for hire.”

Now his mother was ill, but he did not have the finances for passage back to 1855 Ireland to see her. Feeling a need to reach her, he prayed for words that would give his mother comfort.

Accompanying the letter, he included the story of his life in the three verses that would become the hymn, “What a Friend We Have in Jesus.”

Scriven shared the words with a friend, who took a copy to a music publisher. Within two years the poem was published and Charles Converse, a US Attorney and composer, had written a tune for the words in 1868.

At the time of the original publication, no one knew who had written the lyrics.

When a friend came to visit, he was flipping through some of Joseph’s papers and discovered the poem. He was impressed to discover his friend had penned the words to this hymn.

When asked about it, Scriven replied “The Lord and I together wrote the song.”

As a result of this visit, Joseph’s poems were published in a book called Hymns and Other Verses and by the 1880s Scriven received full credit for the hymn.

Joseph Scriven became critically ill in October 1886. In a state of delirium, he stumbled outdoors from his sick bed and fell into a small creek.

One friend described the 66-year old’s death by saying: “We left him about midnight. I withdrew to an adjoining room, not to sleep, but to watch and wait. You may imagine my surprise and dismay when on visiting the room I found it empty. All search failed to find a trace of the missing man, until a little after noon the body was discovered in the water nearby, lifeless and cold in death.”

Legend has overtaken his death with various myths of suicide or murder, but what is clear is that regardless of the circumstances this was a tragic accident. Joseph Scriven was buried next to Eliza Roche in the Pengelley family cemetery. Originally, he was buried in an unmarked grave, but years later local residents did add a marker.

His obituary, published on Friday, October 15, 1886 described him in part by saying: “Mr. Scriven had not an enemy in the world, he was truly a good man and it is to be hoped the sermons he preached on the streets of Port Hope may be like bread cast upon the waters, the fruit of which may be seen for many days.”
The citizens of Port Hope, Ontario thought so much of him they erected a monument on the Port Hope-Petersborough Highway to this humble man who had led such a sad and obscure life. From his pain and heartache, Mr. Scriven gave the world the comforting words to “What a Friend We Have in Jesus.”

When the great evangelist, Dwight L. Moody heard the song in 1875, he said it was “the most touching modern hymn I have ever heard.” Moody and his song leader, Ira D. Sankey, gave the song a national platform through their crusades, writings, teachings and their hymn book Sankey’s Gospel Hymns Number 1.

As war loomed on the American home fronts during World War I and World War II, “What a Friend We Have in Jesus” became the most commonly played and sung hymn {along with Amazing Grace} to send the young men off to war or memorialize these same young men when lost in battle.

The words to this beautiful hymn have served as an anthem with a universal theme in times of “trouble and sacrifice” and “insecurity and doubt.” 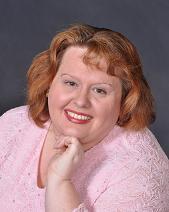 Diana Leagh Matthews writes, speaks and sings to bring glory to God.  She has been published in numerous anthologies, including many Moments books.

In her day job, Leagh is a Nationally Certified Activities Director for a busy nursing facility. She takes great joy in family, friends and soaking in the beautiful wonders and promises of God.

Leagh blogs about her faith and struggles on her  website  www.DianaLeaghMatthews.com  and family history at  www.ALookThruTime.com

Originally published in the September 2019 issue of RUBY magazine