"Advice from My Dad" by Joan Leotta 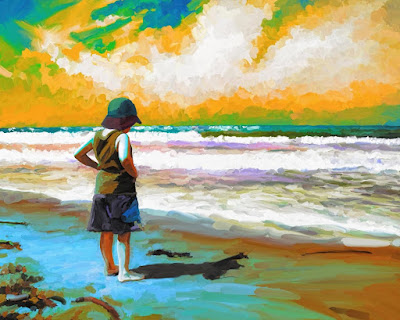 Some of the best advice ever given to me came from my father. When praying for wisdom and help from the Lord, I have found it to be most beneficial to ask advice of the wise people he has given me—one of the best of those was my father.

Although he is now no longer on this earth, his words often come back to me when I am seeking direction.

It was to be my first vacation experience without my parents—two weeks at the Atlantic Ocean with my Grandmother. I was ten years old and in spite of trying to learn to swim at Lake Erie when on vacation with my parents, I was still just a wader when it came to water.

In my dreams, I was a mermaid, even though my real-life experiences with swimming were not very successful.

My mother helped me pack.

My father gave me five dollars (hey, it was the fifties and five dollars was a lot!) and the day before Grandma and I left, Dad sat me down, looked me in the eye and said,

"Have a great time but remember this—never turn your back on the ocean."

I nodded in agreement. However, once I saw that vast expanse of water, all I could think of was playing in it. After all, I fancied myself a mermaid and was sure the sea would pay me homage with gifts of lovely shells.

For our first day at the beach, Grandma rented two beach chairs and sat down while I kicked off my shoes and headed down the sand to the water.

My tender-skinned feet, recently released from those shoes, were a bit delirious with summer freedom. They propelled me in quick hops over the solar-heated hot white sand until at last they found relief in wave's soft damp domain. My toes wiggled in soft flow of water on the damp sand, the cool damp sand.

At first, I just stood there taking in the sight as waves slithered around my toes. Then I ventured out to ankle length. As I walked, bits of shell poked and pricked at those tender soles. I lowered my head and walked a bit farther out, to mid-calf level.

Incoming waves rolled shells and pebbles along the bottom, tickling my toes as they pushed the sought-after detritus into shore then pulled it out again.

I tried to peer through the water to the bottom and in those few seconds between the in and out movement. I turned toward to shore to better spy shells as they rolled out.

Lowering my head, I saw a flash of orange—a fan shell—perhaps a whole one! Reaching down, my full attention focused on that bit of color, hoping to secure it before the wave could pull it out again.

Suddenly water crashed over my head. A huge wave, much larger than normal for the day, was sweeping in and up, pushing me over, rolling me around like a bit of shell.

I gasped and my mouth filled with water. Nasty water. I coughed and choked and I tried to stand up, but my feet kept slipping out from under me. I felt myself and the orange fan shell being pulled out as the wave receded back into the ocean. I closed my eyes.

My mind must have snapped off for a moment or two. I opened my eyes and found my hand clasping the sturdy ankle of a woman who at first tried to shake me off and then reached down and pulled me to my feet, bringing my head out of the water.

I was standing, but precariously, on the tips of my toes, almost floating in water up to my shoulders.

The wave had swept me much farther out than I had wanted to go much farther than my limited ability to swim would/should ever take me. Through the water in my ear, I could hear the woman scolding me.

Salt-water, tears, and ocean mixed, blurred my vision of her. Gradually, I could see a large expanse of red bathing suit, on white legs and white arms flailing about while scolding words came from a freckled face framed by a red swim cap. I think my savior thought I was pranking her.

Before I could sputter out an explanation, the shrill shriek of the lifeguard's whistle tipped through my ear bubbles into my consciousness.

I turned toward shore and saw the lifeguard standing in his chair, pointing my way.

I slogged back with the waves tickling those toes, tempting me to return to their domain. Slowly I made my way toward shore.

At last I could stand, my feet flat on the sand, water only at waist level and I could almost run toward the heated sand where Grandma waited, and the beach chairs waited for me.

When I stepped out of the waves, a sand-covered, waterlogged Venus, I did not get the expected tongue lashing from the lifeguard—he was already on to someone else. When I got back to our chairs, I discovered my Grandma was asleep! She had missed it all.

"Did you have a good time playing in the water? You certainly got sandy!"

I didn’t tell her how afraid I had been, how the water had tried to claim me for its own. Instead, I submitted to her chiding and after stopping first at the hotel's pool room showers—too much sand on me for us to even get on the elevator; we went back to the room and changed.

The next day, I was faced with a decision: go back into the water or stay away. I remembered my Dad's wise advice: "Never turn your back on the ocean."

I realized I had turned my face away from the waves, turned my back on the ocean. I resolved to return to the ocean but keep an eye on it. As the waves came in, I laughed and played in them and occasionally bent down to swoop up a shell—but I kept one eye on the ocean as I did. Mermaid indeed, but now, a cautious one.

I have since applied that advice to other live ventures and adventures. I traveled alone all over Europe at age 19—left a bad job before obtaining a new one and secured an even better job, though it was a poor economy at the time.

When trying something new, I look at all the possibilities. I am not afraid, I am aware of my assets and my limitations--I exercise caution and prayerfully proceed.

"Never turn your back on the ocean.” My father’s advice was the first I gave to my own children when we brought them to the beach. And I think it has served them well—at the beach and in life.

Joan Leotta has been playing with words since childhood. She is a poet, essayist, journalist, playwright, and author of several books both fiction and non-fiction for children and adults. She is also a performer and gives one-woman shows on historic figures and spoken word folklore shows as well as teaching writing and storytelling.
Joan lives in Calabash, NC where she walks the beach with husband, Joe. www.joanleotta.wordpress.com and
https://www.facebook.com/pages/Joan-Leotta-Author-and-Story-Performer/188479350973