"A Journey to Grace" by Kelly Kavich

So many times we fail, and we look to others for their approval and praise. We want tangible items to say we have succeeded and found the treasure of life.

However, in truth, this goal is not what the Lord has set as a success.

For Him, success is a life that is spent at His feet seeking Him and allowing Him to grow us and change us no matter how painful the process may be.

My life began 40 years ago, born to a young man and woman who would go on to serve God in full-time ministry. I was the third of four children, and the first girl.

When I was five years old, I would stand outside our home that was on a busy street in Indianapolis and raise my hands singing and praising the Lord. My little five-year-old thought process was that maybe someone would see and want to know Jesus too.

I remember at the age of nine some other girls and I started a Bible study. One day after a meeting, I came to my mother and said to her that I felt as if the Lord had told me I would go through hard times, but it would be to help others.

I could not fully grasp what exactly that would look like, but I knew that I had heard from God.

Fast forward to my high school years in public school where I wanted so badly to "fit" in and have lots of friends. I desperately wanted to be liked by boys and wear the coolest styles.

But I was a chubby girl, and in the 90s fashion had yet to allow "chubby" girls to dress in the latest styles. It was on its way but not there yet.

My self-esteem was at a low and I figured I would never be one of "those pretty girls." At the age of 16 I thinned out a bit and found some friends; we went to church and school, and we worked together.

So, it was natural that we would also hang out together. Jesus was not the focus of our group and we began to drink, smoke, and smoke weed.

It became our group's thing to do, get together and party. One guy that had started coming to the church took notice of me and we began dating.

By this time, I had bought into the world’s version of what guys wanted and what a relationship should look like, so we got too intimate way too soon.

We ended up marrying at a young age and divorcing a year and a half later. After that, I was sure this is what God meant when I was younger!

I thought surely I must have now gone through it and would be able to help other ladies! I thought it was my “ah-hah!” moment….but I was wrong.

Life went on and I stopped dating and started getting serious about church and had developed a somewhat nominal relationship with Jesus.

I went on Sundays and Wednesdays and even taught some classes for girls. But on the weekdays and weekends, my life was not one of surrender.

That would not come until I was 26 years of age. I was a nanny for my two adorable nephews (who still have my heart) and lived in their house.

I had started to seek God because I had a lot of alone time when they were napping or after their parents got home from work. The Lord awakened my spirit through the power of His Spirit, and I was filled with the gift of tongues.

My sister and I began to serve as co-youth pastors and it seemed like I was well on my way to a life of ministry and being alive in Christ. In my personal life, however, things weren’t going so great.

I had gained a lot of weight and I was becoming lonely and subconsciously a little desperate. I was living on my own and I had started to walk after I would get off work.

I started to lose some of the weight and after a while, a younger guy began to show some interest.

Because of my loneliness and not allowing the Lord to become the one who filled that, I soon came to the temptation and began a not-so-wise relationship with this person. It was a whirlwind, and when it ended, I was worse off than ever.

I was now 30 years old, living alone, angry with God and walking away from the church. I told the Lord I did not want anything to do with him ever again, even though it was my actions that had led me to where I was; I wanted someone else to blame.

So, for about five months after that I slipped further and further into a place of darkness no one could get me to come out of. I began drinking, smoking, and smoking weed again.

I began hanging out with friends that promoted those things again. My life was miserable; it seemed that everything I did was a failure.

I eventually ended up in a relationship up with a man who was five years older than me and had been an acquaintance for quite some time.

I knew this man’s reputation was not a good one. But I told myself it didn’t matter; he wanted me, and that was what mattered. Life with this man took me down a path I would have never dreamt of going down.

He became abusive in every way; he had me living in situations that were unbearable. I stayed all for the sake of what I had decided was “love.”

My family tried to get me to leave him; my friends began to back away. Nothing seemed to be working out right. I lost everything I had.

We lived in motels, he had me stealing, and eventually living in a trailer with no plumbing and holes in the floor.

I would go to my sister’s house to take showers each day. She had become the only person I knew would be there for me. My parents were still there too, but they knew that they could not make me leave.

What it took for me to walk away was the Spirit of God. My mother had prayed “Lord, let him hurt her so that she knows he will never change. But do not let him harm her.”

That is exactly what happened.

The abuse went from a weekly thing to daily thing and I couldn’t take anymore. I lay in bed one evening after he had been beating me, crying and broken, and I said “Lord, just give me the courage to get up and go. If you give me the courage I will not turn back again.” 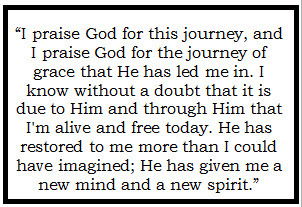 I got up, took my purse and my dog and started walking out. He stopped me and pinned me down to the bed telling me I wasn’t going anywhere. But my mind had been made up; when he let me up he took all the money I had on me before I could walk out the door. I bought my life for $40.00 that night.

I walked away, and got in touch with my sister. She came and picked me up, and the next day I went and spoke with a dear lady from our church. She knew a place I could go out of state that would be safe and I could get the help I needed never to return to this man.

Within three days I was out of state and being checked in by my parents to a Mission Teens center. The Lord did a transformational work during my time there. I now call it the best/hardest time of my life.

It was hard, it was work, but Jesus was there every step of the way and His Holy Spirit renewed my heart with an indescribable joy.

There were powerful times of the Holy Spirit’s movement that were undeniable; I saw others set free from drugs, and I saw them filled with the Spirit. I was there for seven months before leaving and coming home.

After almost a year back in Indiana, I was crying out to God saying, “Lord I don’t want anything but you. If you have a husband for me that is good, but if not, you will always be enough for me.”

A few days after praying that, I met my husband and a year later we were married. While at the mission I knew God was calling me to write and speak and work with women who needed a new beginning.

I also know that I still have the promise of a child waiting. The Lord is not done with my story.

I believe three years into our marriage He is moving and shifting us to where He wants us to be so that He can use us for His glory.

My prayer is that others will come to know my Jesus the way I know my Jesus, and have an intimate walk that comes through being filled with the Holy Spirit and spending time with Him every day.

He has restored to me more than I could have imagined; He has given me a new mind and a new spirit.

My life is full of Him, and He wants to do the same for each and every one who will humble themselves and pray.

Seek Him and seek a life that is worth something. He is a good Father; waiting with open arms for those who will humble themselves and pray to Him.

I have just recently turned 40 years old and life has never looked better to me. I feel a fullness that I have never known before;

He is beginning to open doors of ministry more profoundly and I am so excited to be on this ride with Jesus. I know that no matter where He leads, I will follow. 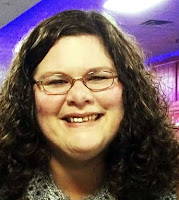 My name is Kelly Kavich, I currently am in the process of allowing Jesus to lead me into the next chapter of my life. I have a passion for writing about the Lord and a great many things He has done inside of me. I am wife to my amazing and wonderful husband; I am a non-traditional student and the Woman's Minister at my church. I also serve in several other capacities for the church; I create the bulletin and announcements each week and run slides for our worship team. I desire to work for the Lord and not for man to see captives set free from anything that has bound them for far too long. The call that Jesus has placed upon my life is to see a Woman's Shelter that is Spirit-filled and led be open in my hometown, to write for God and to teach and preach of His love and redemption.

Originally published in the September 2019 issue of RUBY magazine