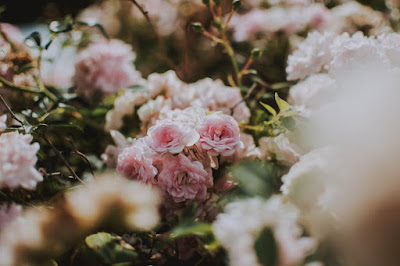 “…I am come that they might have life, and that they might have it more abundantly.”  - John 10:10
Oh, no!  Watch out roses. Gene has a shovel…. Gene, my husband, enjoys growing rose bushes. However, he is an impatient gardener. When the bushes don’t begin leafing out in the spring as he believes they should, he replaces them.


This spring was no different, and two bushes were dug up and tossed aside. Upon examining them, I discovered tiny green spots on both bushes and I replanted them in a different area.
Through the following weeks, I have watched as more areas of the bushes began to turn green and tiny leaves sprouted. It won’t be long until the bushes bloom and I’ll be rewarded with colorful and fragrant roses.
Sometimes we may treat people as my husband treated the bushes. We look at those who may be struggling with addictions or other problems and we consider them to be of little worth. We may say, “They’ll never amount to anything. Why waste time on them?”
Jesus, however, had a different viewpoint. He told a parable in Luke 13:6-9 about an impatient owner of a vineyard. The man had waited three years for a fig tree to bear fruit, but it failed to do so. He told the gardener to cut the tree down, but the overseer of the vineyard pleaded with the owner, “Sir, the man replied, ‘leave it alone for one more year, and I’ll dig around it and fertilize it. If it bears fruit next year, fine! If not, then cut it down.’” (Luke 13:8-9) The gardener wasn’t ready to give up on the tree.
Jesus knows the potential deep within the person that we might be ready to dismiss as unworthy. He knows if they will surrender their lives to him, it is possible for that person to become vibrantly alive and to bloom for the rest of their life. After all, Jesus is the Master Gardener.
Perhaps I need to ask myself, “Am I as concerned about people who have been ‘thrown away’ by society as I was about the rose bushes tossed aside by my husband?”
What about you? Will you help others to find the abundant life Jesus offers?

Norma C. Mezoe began writing after a crisis in her life. She has been a published writer for thirty years. Her writing has appeared in books, devotionals, take-home papers, and magazines. She lives in the tiny town of Sandborn, Indiana where she is active in her church as a clerk, teacher, and bulletin maker. Contact at: normacm@tds.net
at August 15, 2019