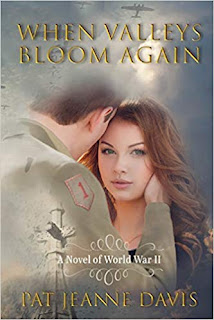 Abby sat in the middle of a group of children, reading aloud a favorite story.

She looked up to see Carol at her side. “Jim’s on the telephone. I’ll fill in here,” she said, taking the storybook out of Abby’s hands. “He says it’s important.”
She rose from a stool, her heart beating faster. Jim wrote whenever possible and only called occasionally—but never in the middle of the day. It must be urgent.
When out of sight, she sprinted down the hall, dropping breathless into a wooden chair beside the telephone. “Hello, Jim,” she said, pressing the receiver tight to her ear as if to draw him closer.
“Hello, Darling. I had to call. But I haven’t got long to talk.”
Silence.
“Jim ... Jim?” Leaning forward, she rapped the cradle switch. “Are you there?”
“I’m here. Sorry to call like this,” he said, his voice cracking. “They’re shipping me out.”
She slumped back in the seat. “When?”
“I board a train for New York next week. Then a troopship.”
Abby attempted to speak, but a lump rose in her throat.
“Sweetheart, I’m sorry I won’t see you before I leave,” he said in a subdued voice.
She swallowed hard. “Can’t I meet your train s-s-somewhere?”
“I looked into that. There’s nowhere.” The hopeless tone in his voice was unmistakable.
“Then I’ll come to New York.”
“No time for that.”
Her eyes filled. “No time for us?”
“Besides, there’s no more furloughs or passes. Look. It’s not all bad. I’ll probably get to London. Maybe even see your parents when I get a pass.”
Abby sensed he was struggling for words.
“So, that’s at least a cheerful bit of news, isn’t it?”
“S-S-Some,” she said, trying to conceal disappointment in her voice.
“Darling, there’s a line of men waiting to use this phone. I’ll have to go.”
She was losing the battle to stay calm and accepting. “Must you hang up so soon?”
He cleared his throat before speaking again. “I’m not so good at always saying what I feel. Still, you know how much I love you.” His voice carried a wealth of emotion. “I’ll be back.”
“I’ll be waiting for you,” she said, then mumbled a muted, “goodbye.” With a click, their connection was severed. She replaced the receiver and closed her eyes, her lower lip trembling. She hadn’t reacted the right way to his disappointing news. After all, Jim was being sent off. He was the one at risk, not her.


When she got back to the room Carol and the children were gone. She cleaned the blackboard and tidied up before leaving. Then she strolled to the tower and sat there until the light faded. How much longer would this war go on? Scenes from the latest Pathé newsreel—devoted to the progress of the war—flashed before her eyes. Please, Lord, keep Jim safe.

Returning to the house, she found her uncle listening to the president’s weekly fireside chat. He pressed a finger to his lips and motioned for her to take a seat. “Nearly done,” he mouthed. On occasion, she would join him and her aunt for these broadcasts. Uncle Will proclaimed his liking for Mr Roosevelt out of patriotism and Aunt Val by way of a fondness for Eleanor.
When the president finished, Uncle Will turned off the radio. “I see that Eisenhower’s in England and has command of U.S. Forces in the European theater.”
Abby went straight to her complaint. “Jim’s being sent to England.”
“Oh, dear,” he said, leaning back and folding his arms. “This afternoon his sister hinted something was up.” He furrowed his brow. “I know how disappointed you must feel. But look on the bright side,” he said, grinning. “Perhaps he’ll get to meet your parents.”
“Yes, that’s what Jim thought.” She forced a smile. “It’s something to hang on to.”
“Let me show you this.” Uncle Will went over to the map on the wall that bristled with tacks of different colors. He pointed to one section, motioning for Abby to join him. “The President says that because of our navy’s victory over the Japanese here at Midway Island, there’s been a decisive turn in this phase of the war. This affects everything else to come.”
“Surely, this war can’t go on much longer,” she said, her voice quivering.
He rubbed the back of his neck. “I wouldn’t go so far as to say that, yet. Your Jim is off to fight to ensure our freedom. Pray God may help him to do what needs to be done for however long it takes.” He placed a hand on her shoulder. “Jim must do what he needs to do, and you must have faith that he will come back to you.”
“You always say what I need to hear, Uncle.”
* * *
Ten days later a letter came from Jim, written on board the Queen Mary. Abby dropped into a chair in her room, savoring the thought of opening it. She turned the envelope over, re-read her name, then ripped it open.
Aug. 3, ’42
Dearest Abby,
My thinking of you is now a reflex action, and writing is a most pleasant way to put some of those thoughts in tangible form. First, please accept my apology for the abrupt way in which I told you of my deployment.
Must keep this brief, but will try to write soon with a forwarding address. The same ocean liner that brought you to America three summers ago is now a troopship taking me back to England. Isn’t life strange? This is the first time out of the States for most of us on board. We’re trying to see it as an adventure as well. Spirits are high. To pass the time we play poker (with matchsticks).
You have filled my life in a most wonderful way. I cannot properly express my joy. I want to share my thoughts, my life, my being with you. That you accept my love is wonderful. Thank you for letting me love you.
Always Yours, Jim
“Always Yours, Jim,” Abby repeated.
She reached for the engraved wooden box on the dresser in which she stored a miscellany of souvenirs with memories to be cherished a lifetime—a ticket stub from a movie, a concert program, a menu from the restaurant on their first date—all mementos of experiences that had not yet congealed into a real life together. She removed the lid and fingered a shell from the seashore where they’d strolled at sunset.
Then she kissed his letter and numbered the envelope before adding it to the other dull gray ones bound with red hair ribbon—all sent when Jim was stationed at boot camp. “Until your next one,” she said out loud, slipping the stack back into the drawer. This communication with him was only one end of a slender thread that must tether them across the miles if their love was to stay alive. Letters by themselves weren’t much, but she would have to settle for them.
© Pat Jeanne Davis 2019 – When Valleys Bloom Again – Elk Lake Publishing 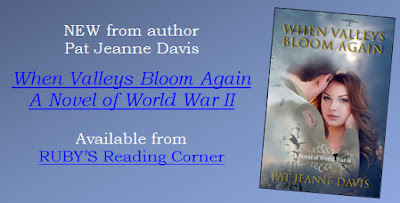 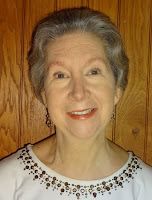 Pat Jeanne Davis writes from her home in Philadelphia, Pa. She enjoys flower gardening, genealogy research and traveling with her British-born husband. Her articles, essays and short stories have appeared in print and online. She is a member of American Christian Fiction Writers and Historical Novel Society. Pat has a particular interest in the World War II Era. Her debut novel When Valleys Bloom Again is a WWII inspirational romance set in the US and UK, published by Elk Lake Publishing, February 1, 2019. She loves to hear from her readers at https://www.patjeannedavis.com